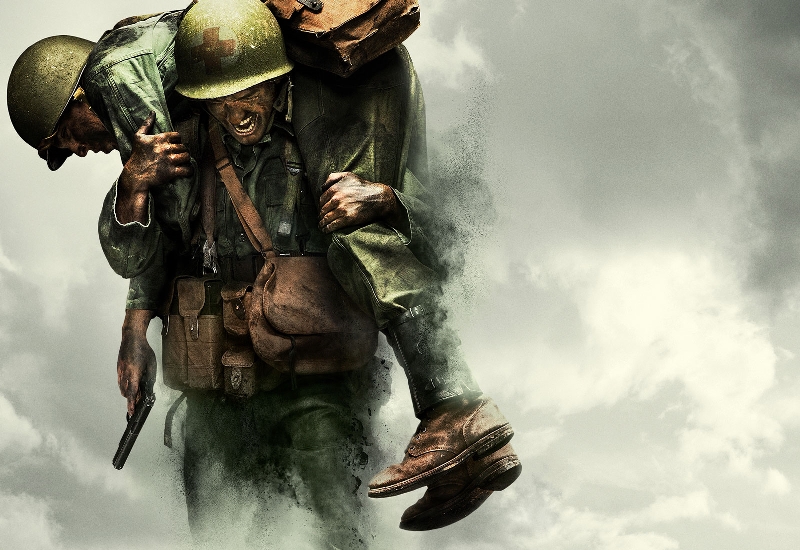 Usually we’re all about the television series and documentaries but lately we’ve been watching more films on Netflix. And it seems like every movie I pick out is based on a true story. There are a lot of great memoirs and biographies, but nothing prepared me for Hacksaw Ridge.

I suppose there was likely a lot of hype about this film around awards season or its initial release, but I’ve really become out of touch with all that so I hadn’t heard anything prior to watching. I don’t see many movie previews anymore, or advertisements. So when we put this on I just thought it was a war movie, maybe like Saving Private Ryan or Pearl Harbour. I hoped it would be a decent flick, because I do enjoy a decent historical war movie. But I really had no idea what to expect.

Hacksaw Ridge is the true story of Desmond T. Doss, the conscientious objector who, at the Battle of Okinawa, won the Medal of Honour for his incredible bravery and regard for his fellow soldiers. This is an incredible story! A conscientious objector for those who aren’t up on the terminology is an “individual who has claimed the right to refuse to perform military service” on the grounds of freedom of thought, conscience, or religion.

Doss didn’t refuse to go to war, when Pearl Harbour was bombed he signed up and volunteered. But he didn’t want to fight as a soldier. He didn’t want to kill anyone. He didn’t even want to carry a gun to protect himself. He wanted to go as a Medic and help save people from dying in the battle. Of course, nobody really understood this and he got a lot of grief, even faced a court martial.

The battle scenes are graphic. Gruesome at times. Sometimes I wanted to look away. There was a moment during the big battle that I was pleading with the television for Doss to just stop and leave before he got hurt. It was exhausting!

But what an incredible true story. One that I certainly had never heard before. If you’re looking for an amazing film to watch that will make you laugh, cry, get angry, hide your eyes, and every other strong emotion that you can possibly feel, watch Hacksaw Ridge. This movie will restore your faith in humanity. True heroes do exist.